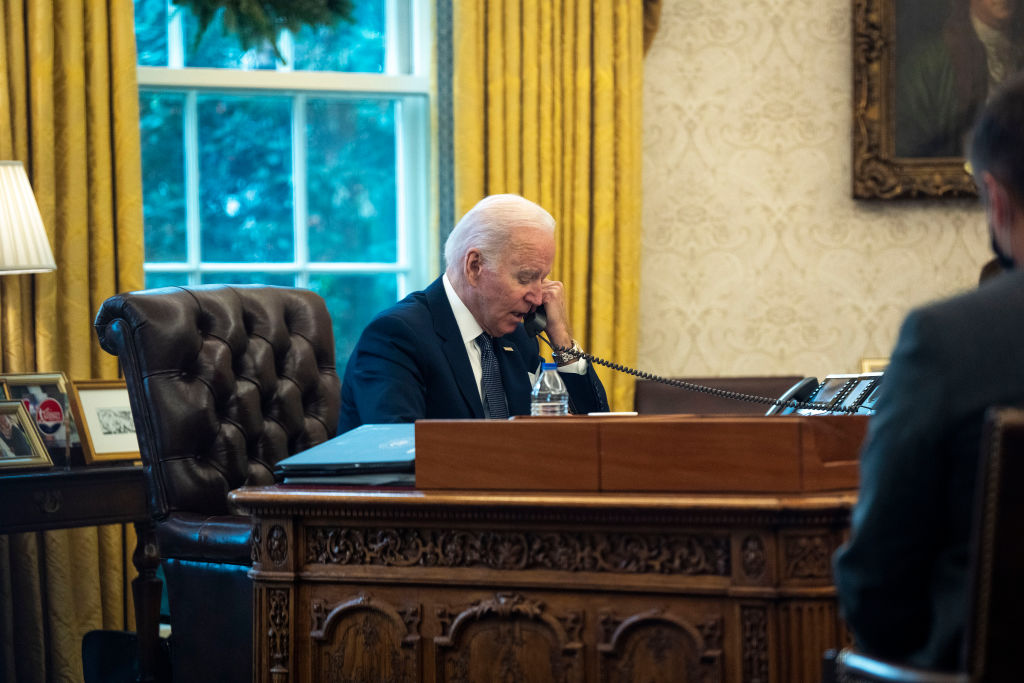 Biden can forgive up to $50,000 in student loan debt, group of 85 Democratic lawmakers say

US President Joe Biden speaks on the phone with Ukrainian President Volodymyr Zelensky from the Oval Office of the White House, as seen in December 2021. (Photo by Doug Mills-Pool/Getty Images)

The countdown is officially back, as we are within the 100-day window for student loan repayments to resume. For nearly two years, federal student loan borrowers have had the choice of whether or not to make payments during the COVID-19 pandemic, but May 1 is currently the date that option will end.

The student loan forbearance has been extended several times, and President Joe Biden has announced a few rounds of forgiveness that, as of January 20, totaled $15 billion; but that’s only about 1% of federal student loan debt. With more than $1.7 trillion in outstanding federal loans held by 43 million Americans, Democrats and other advocates continue to push the administration to forgive up to $50,000 in student debt.

On Jan. 25, a group of 85 Democratic lawmakers — across the House and Senate — sent a letter to Biden urging him to direct the Department of Education to “publicly release the memo outlining your legal authority to broadly overturn the federal student loan debt and immediately forgive up to $50,000 of student loan debt per borrower.

“Given the high number of COVID-19 cases and corresponding economic disruptions, restarting student loan repayments without this blanket cancellation would be disastrous for millions of borrowers and their families,” the letter said.

In the spring of 2021, White House Chief of Staff Ron Klain said Biden had asked the Education Secretary to explore whether the executive branch had the legal authority to forgive student loan debt. At the time, the memo was promised to be released within weeks. Almost a year later, however, it’s just crickets on that front.

Although the full memo has yet to be released, the new yorker October 29, 2021 reported for the first time that a heavily redacted version exists. This version doesn’t show much other than the fact that the White House had the memo for over six months without releasing any information to the public.

Biden doesn’t buy the idea that he has the power to cancel a federal student loan by executive order, but many Democratic lawmakers do. At the Student Debt Cancellation Town Hall hosted by NextGen America, Student Debt Crisis Center, Public Citizen and MoveOn on Thursday, several Democratic lawmakers said they believe Biden has the power to cancel student debt by decree.

“Suspending student loans is not enough,” Senate Majority Leader Chuck Schumer said during the town hall. “We need student debt wiped out, plain and simple.” Biden can, according to Schumer, cancel student debt with the “stroke of a pen,” and the law requires no legislation.

Democratic lawmakers and advocates are pressuring Biden to forgive up to $50,000 in student loan debt per borrower, but Biden campaigned to forgive only $10,000 per borrower. His tone changed during his year in office, however.

During a press conference in mid-January, Biden was asked this question: “You campaigned to forgive $10,000 in student loans. Do you still plan to do this, and when? He ignored the question.

Additionally, in a town hall on CNN on Feb. 17, 2021, Biden said he opposed canceling student loan debt for borrowers who attended “elite” private colleges, including Harvard University, Yale University and the University of Pennsylvania. He still held this opinion in May 2021.

“The idea that you are going to [the University of Pennsylvania] and you pay a total of $70,000 a year and the public should pay for that? I disagree,” he said. The New York Times.

Not only are Democratic lawmakers pushing Biden to write off student debt, but they’re adding pressure to the timeline. They want student debt canceled before the May 1 forbearance end date.

“We’re all looking at another ticking time bomb for student loans,” Senator Elizabeth Warren said at the town hall. “Payments will resume. It could throw millions of families into a financial cliff when it explodes.