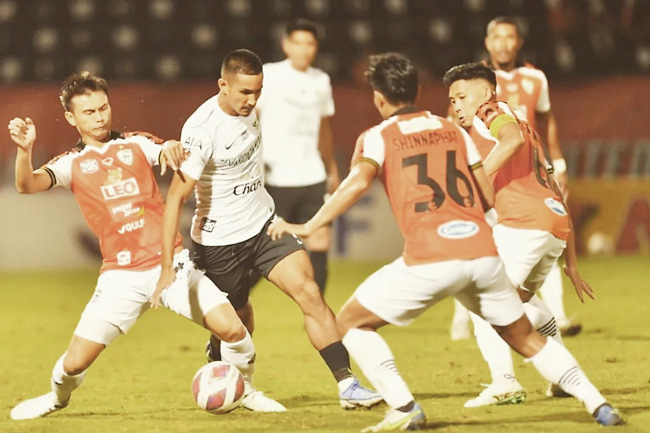 The national winger was named in the starting line-up for the second time in his sixth league appearance for Chonburi FC since moving late last year.

Brunei’s most high-profile football export caught the eye of team manager Sasom Pobprasert following his impressive form when he came on as a substitute in the previous match against Chiangrai United.

In a cameo role in the match, Faiq nearly opened his account for his new team after hitting the post largely thanks to his quickening pace and dribbling ability.

The 23-year-old tried to register a third assist in his career by passing the ball to Kritsada Kaman, but the striker’s first shot was stopped by Chiangrai goalkeeper Sinthaweechai Hathairattanakool.

The visitors took the lead through Yodsak Chaowana whose effort was initially called off on suspicion of offside. However, the referee allowed the goal following a video assistant referee (VAR) review.

The hosts equalized through Gidi Kanyuk’s free-kick, but Arthit Boodjinda – who spent time with Chonburi on loan in 2019 – came back to haunt his former side with the injury-time winner.

The Sharks, who were second at the start of the month, slipped to fourth in the table after a second straight league loss coupled with rivals BG Pathum’s victory over Chiangrai United.

Faiq and his teammates will be looking to bounce back in their next league clash against Suphanburi on February 20.

Meanwhile, former DPMM FC defender Charlie Clough watched his current side Nakhon Ratchasima FC lose 2-1 to Khon Kaen United on his return to the team since serving a suspension for his deportation against Prachuap.