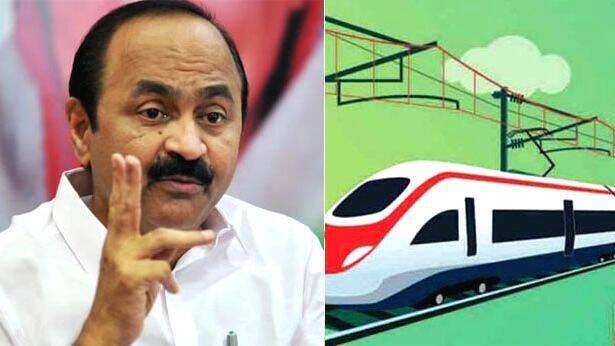 THIRUVANANTHAPURAM: Opposition leader VD Satheesan criticized the government following the publication of the DPR of the SilverLine project. Satheesan said in a press release that the representative of the French company that prepared the DPR said that it was prepared in a jiffy.

“The DPR released now is an unscientific and incomplete report. How can a DPR be prepared without conducting environmental or social impact studies or surveys? According to the DPR, Central Kerala has all the natural resources necessary to build the 530 km K-rail”.

“About 55% of the K-rail, or 292 km, the embankment will be placed at a height of 30 to 50 feet at a height of one meter to nine meters above the flood stage. It should be made of stone and sand like a fort. The rest of the space should be walled on both sides. Where are the natural resources needed for this hidden in central Kerala?”.

“The K-Rail MD contradicted what was said in the DPR. It says the stones and sand for the construction will be purchased by rail from other states. The government does not even have an estimate of the number of tonnes of natural resources it will need. If the DPR doesn’t have any details on this, what kind of report is this?” asked VD Satheesan.

“The opposition also posed the same questions raised by the Railway Board representatives to the K-Rail authorities. The Ahmedabad-Mumbai high-speed train is expected to have 36,000 passengers. On what basis should K-Rail have 80,000 passengers? This is the same question asked by the Railway Commission and the opposition,” he said. VD Satheesan also alleged that the government was trying to obtain a loan from JICA in Japan by manipulating data.

“It was just the other day that the Chief Information Commissioner said that the DPR could not be made public because it contains top secret information. The DPR came out when MP Anwar Sadat served notice outrage against Vijayan. Where has the secretive nature gone now? If the DPR is exposed, the fabricated stories about the project will crumble. This is why it has been kept secret until now. The questions raised by the The opposition cannot find an answer in this DPR. That is why the Chief Minister did not respond. Even now, “the government’s willingness to publish the DPR is a political victory for the opposition. The UDF committee will study the 3700-page DPR. Direct discussions will take place with economic, technical and environmental experts,” said Satheesan.