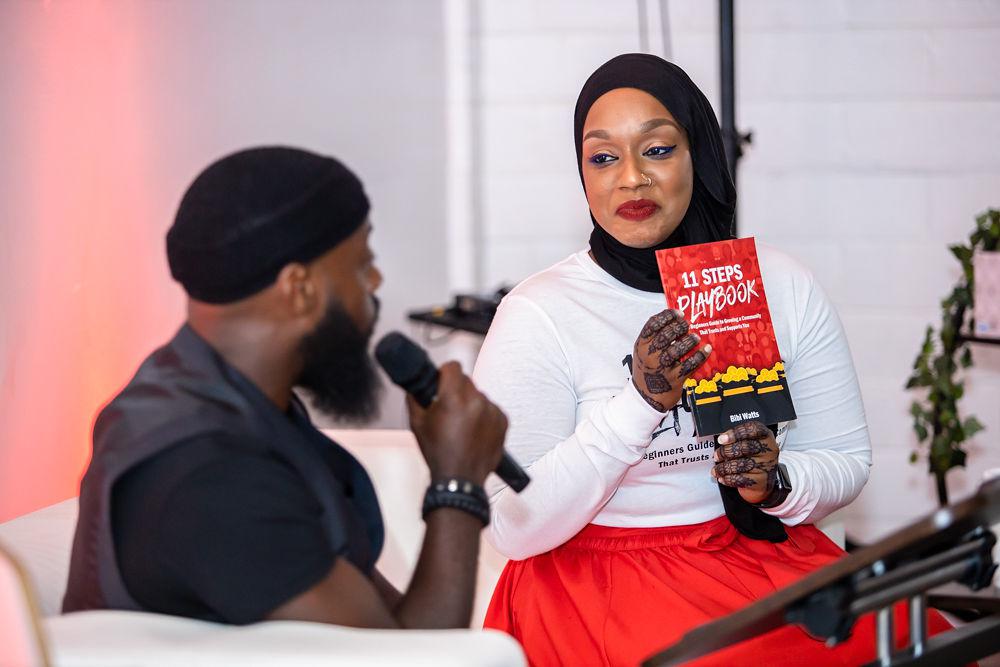 Do you have internet influencer dreams? Bibi Watts has some advice.

Watts, a Stafford resident, recently published her first book, “11 Steps Playbook: The Beginners Guide to Growing a Community That Trusts and Supports You.”

The book is structured with short and punchy chapters like “Make it Rain”, “Niche it or Ditch it”, “Are you Afraid of Commitment?” and “Applause Your Audience” and, according to Watts, relies heavily on reader engagement, with a homework section at the end of each chapter.

“This book is for people who have lots of great ideas and want to build a brand online but don’t know where to start, as well as people who have businesses and/or brands online but have the feeling like I’ve hit a plateau,” Watts said.

And as she states in the book’s executive statement, “If you’re the kind of person who doesn’t like homework, just close the book.”

But for those who aren’t put off by a little hard work when it comes to starting or growing their online brand and eventually monetizing it, Watts urges them to read on.

She preaches the projection of online authenticity and vulnerability. She also said it was important to make wise choices when posting content.

“Choose impact over impulse,” she advised, adding, “You don’t have to show it all. You can let go of parts of yourself and stay authentic.

When deciding whether or not to write a book, Watts said the decision to go for it ultimately comes down to what she hears from her more than 12,000 subscribers, especially many of them asking how they can succeed in marketing through social media.

After spending years working to expand her online presence through Instagram, Facebook and online blogging, she finally gave up her day job as a loan officer at the end of 2021 to switch full-time to coaching. and consulting in the social media space.

Additionally, when she herself went looking for helpful books to teach her how to raise her status online, she said she was unsuccessful, describing the books she came across as ” fluffy”.

“My book is important because I’ve never seen or heard of it like this,” she said. “Unlike other books in its class, mine has action steps in every chapter to ensure you get results.”

She said those looking to make a splash as an influencer can also check out her book for tips on navigating social media, which she says doesn’t come easy for everyone.

A lifelong writer and singer, Watts began reciting poetry in public in 2009, often bringing onlookers to tears. It was during one of these performances that she met Mélanie Villegas.

Villegas said she was so impressed with Watts’ presence and felt compelled to meet her.

“She had such light and vibe, so (after her performance) I went up and introduced myself,” she said.

Since that first encounter, Villegas has followed Watts’ journey online and marveled as she grew her social media following. Watt categorized her brand as a thought and lifestyle influencer – a career trajectory from which she has benefited financially over the past two years.

Villegas was also on hand to celebrate the launch of Watts, which took place on August 4 at Sharespace, a downtown Houston venue. She said she was happy to support her friend’s new venture as an author.

“She’s a community builder and she connects with other women, and that’s what I love about her,” she said.

A local Houston nurse and influencer who uses the @queendandridge Instagram account, she and husband Kin attended Watts’ book launch, answering questions during a panel discussion on monetizing your social media presence.

Like Watts, Dandridge said presenting yourself as real and relatable is key to building a vibrant, strong, and ultimately lucrative online community.

Regarding the “11 Step Playbook”, Dandridge called the book “phenomenal” and praised Watts’ accomplishment.

Watts said she hopes her efforts will help people realize that the online social media space can accommodate everyone and that they can use her book and the tools it teaches to carve out their own business. of internet.

“My ultimate message is that everyone has a story to tell and I want to help you tell yours using the heart of storytelling and video marketing,” she said. “There is room for everyone to shine.”

Watts’ book can be purchased on Amazon. Find her on Instagram @bibiwattsco and on Facebook at Bibi Watts.

How to Avoid Student Loan Debt

Here’s how to buy perfume online without a smell test

A small step towards green energy